Catherine M. Conaghan is professor of political science at Queen’s University in Kingston, Ontario. Her research has included fieldwork in Ecuador, Peru, and Bolivia. She is the author of Fujimori’s Peru: Deception in the Public Sphere and Restructuring Domination: Industrialists and the State in Ecuador, and is the coauthor of Unsettling Statecraft: Democracy and Neoliberalism in the Central Andes. She has been a visiting scholar at Princeton University, the University of Notre Dame, the University of Miami, the Woodrow Wilson International Center for Scholars, the University of San Diego, the Instituto de Estudios Peruanos, American University, and the Facultad Latinoamericana de Ciencias Sociales-Ecuador. In 2013 she was appointed as the Sir Edward Peacock Professor of Latin American Politics.

Deception in the Public Sphere

Alberto Fujimori ascended to the presidency of Peru in 1990, boldly promising to remake the country. Ten years later, he hastily sent his resignation from exile in Japan, leaving behind a trail of lies, deceit, and corruption. While piecing together the shards of Fujimori&rsquo;s presidency, prosecutors uncovered a vast criminal conspiracy fueled by political ambition and personal greed.
The Fujimori regime managed to maintain a facade of democracy while systematically eviscerating democratic institutions and the rule of law through legal subterfuge, intimidation, and outright bribery. The architect of this strategy was Fujimori&rsquo;s notorious intelligence advisor, Vladimiro Montesinos. With great skill, Fujimori and Montesinos created the appearance of a democratic public sphere but ensured it would work only to suit their personal motives. The press was allowed to operate, but information exchange was under strict control. The more government officials tampered with the free flow of ideas, the more they inadvertently exposed the ills they were trying to cover up. And that proved to be their downfall.
Merging penetrating analysis and a journalist&rsquo;s flair for narrative, Catherine Conaghan reveals the thin line between democracy and dictatorship, and shows how public institutions can both empower dictators and bring them down. 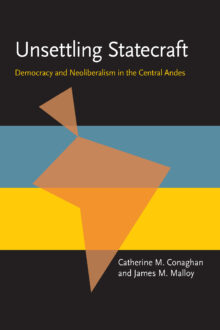 Democracy and Neoliberalism in the Central Andes

Latin America in the 1980s was marked by the transition to democracy and a turn toward economic orthodoxy. Unsettling Statecraft analyzes this transition in Bolivia, Ecuador, and Peru, focusing on the political dynamics underlying change and the many disturbing tendencies at work as these countries shed military authoritarianism for civilian rule.

Conaghan and Malloy draw on insights from the political economy literature, viewing policy making as a “historically conditioned” process, and they conclude that the disturbing tendencies their research reveals are not due to regional pathology but are part of the more general experience of postmodern democracy. 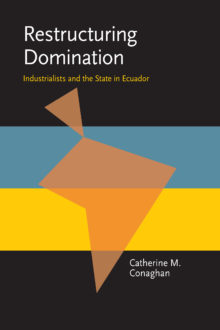 Industrialists and the State in Ecuador

The industrial development of Ecuador has made fortunes for some, but has largely bypassed the general population. Armed by its new power, the bourgeoisie has captured sate mechanisms for its own advancement, leading to the paradox of a “democratic authoritarianism.” In this study, Catherine M. Conaghan views the crucial differences between the social and economic changes in newly developed Latin American nations and those of the southern cone. Using Ecuador as her case study, she shows how industrial growth has given birth to an exclusive, ingrown bourgeoisie that is highly dependent on the state and foreign capital and is increasingly alienated from the peasants and urban poor.