Chris C. Demchak is associate professor of public administration and policy at the University of Arizona, Tucson. 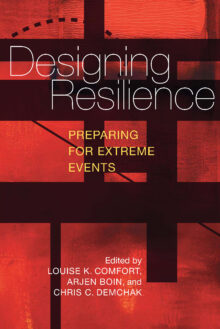 In the wake of severe climatic events and terrorist acts, and the emergence of dangerous technologies, communities, nations, and global organizations have diligently sought to create strategies to prepare for such events. Designing Resilience presents case studies of extreme events and analyzes the ability of affected individuals, institutions, governments, and technological systems to cope with disaster.

This volume defines resilience as it relates to disaster management at specific stages: mitigation, prevention, preparation, and response and recovery. The book illustrates models by which to evaluate resilience at levels ranging from individuals to NGOs to governmental jurisdictions and examines how resilience can be developed and sustained. A group or nation’s ability to withstand events and emerge from them with their central institutions intact is at the core of resilience. Quality of response, capacity to improvise, coordination, flexibility, and endurance are also determinants. Individual case studies, including Hurricane Katrina in the United States, the London bombings, and French preparedness for the Avian flu, demonstrate effective and ineffective strategies.

The contributors reveal how the complexity and global interconnectivity of modern systems&mdash;whether they are governments, mobile populations, power grids, financial systems, or the Internet&mdash;have transcended borders and created a new level of exposure that has made them especially vulnerable to extreme events. Yet these far-reaching global systems also possess the ability to alert and respond at greater speeds than ever before.

The authors analyze specific characteristics of resilient systems&mdash;the qualities they possess and how they become resilient&mdash;to determine if there are ways to build a system of resilience from the ground up. As such, Designing Resilience will inform a broad range of students and scholars in areas of public administration, public policy, and the social sciences.