Christian Fernández is associate professor of Latin American studies at Louisiana State University, where he has twice served as director of Hispanic studies. He is the author of Inca Garcilaso: Imaginación, memoria e identidad. 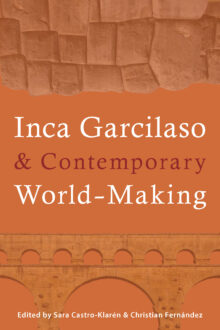 This edited volume offers new perspectives from leading scholars on the important work of Inca Garcilaso de la Vega (1539–1616), one of the first Latin American writers to present an intellectual analysis of pre-Columbian history and culture and the ensuing colonial period. To the contributors, Inca Garcilaso’s Royal Commentaries of the Incas presented an early counter-hegemonic discourse and a reframing of the history of native non-alphabetic cultures that undermined the colonial rhetoric of his time and the geopolitical divisions it purported. Through his research in both Andean and Renaissance archives, Inca Garcilaso sought to connect these divergent cultures into one world.
This collection offers five classical studies of Royal Commentaries previously unavailable in English, along with seven new essays that cover topics including Andean memory, historiography, translation, philosophy, trauma, and ethnic identity. This cross-disciplinary volume will be of interest to students and scholars of Latin American history, culture, comparative literature, subaltern studies, and works in translation.