Christina Ezrahi is an independent scholar and historian of Russian culture. 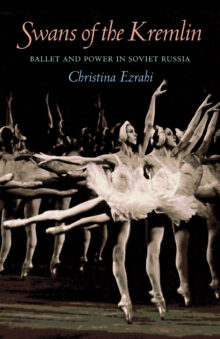 Swans of the Kremlin

Ballet and Power in Soviet Russia

Classical ballet was perhaps the most visible symbol of aristocratic culture and its isolation from the rest of Russian society under the tsars. In the wake of the October Revolution, ballet, like all of the arts, fell under the auspices of the Soviet authorities. In light of these events, many feared that the imperial ballet troupes would be disbanded. Instead, the Soviets attempted to mold the former imperial ballet to suit their revolutionary cultural agenda and employ it to reeducate the masses. As Christina Ezrahi’s groundbreaking study reveals, they were far from successful in this ambitious effort to gain complete control over art.

Swans of the Kremlin offers a fascinating glimpse at the collision of art and politics during the volatile first fifty years of the Soviet period. Ezrahi shows how the producers and performers of Russia’s two major troupes, the Mariinsky (later Kirov) and the Bolshoi, quietly but effectively resisted Soviet cultural hegemony during this period. Despite all controls put on them, they managed to maintain the classical forms and traditions of their rich artistic past and to further develop their art form. These aesthetic and professional standards proved to be the power behind the ballet’s worldwide appeal. The troupes soon became the showpiece of Soviet cultural achievement, as they captivated Western audiences during the Cold War period.

Based on her extensive research into official archives, and personal interviews with many of the artists and staff, Ezrahi presents the first-ever account of the inner workings of these famed ballet troupes during the Soviet era. She follows their struggles in the postrevolutionary period, their peak during the golden age of the 1950s and 1960s, and concludes with their monumental productions staged to celebrate the fiftieth anniversary of the revolution in 1968.