Christopher Bursk is the author of seven previous books of poetry, including Cell Count and Ovid at Fifteen. He is the recipient of NEA, Guggenheim, and PEW Fellowships. Bursk is professor of English at Bucks County Community College in Pennsylvania. 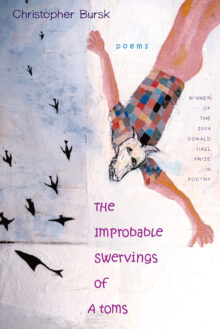 The Improbable Swervings of Atoms

Winner of the 2004 Donald Hall Prize in Poetry
The Improbable Swervings of Atoms follows the comedic, often painful, physical and emotional travails of a young boy growing up in 1950s America. He watches the McCarthy hearings, conquers the Congo, assassinates the president, has his head stuffed into a toilet, drops his uniform on the fifty-yard line, and tries to make sense of Lucretius&rsquo;s De Rerum Natura.
The poems engage history in a very intimate way, revealing how a boy, as he matures, attempts to understand the world around him, his own physical development, the people in his life, and what it means to live in a country and time where it is impossible to disengage oneself from world events&mdash;where, in fact, the quest for identity is an act that requires one to rewrite history in personal terms.