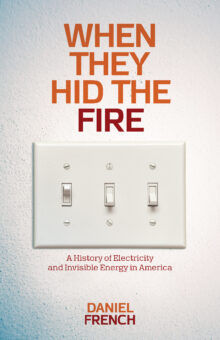 When They Hid the Fire

A History of Electricity and Invisible Energy in America

When They Hid the Fire examines the American social perceptions of electricity as an energy technology that were adopted between the mid-nineteenth and early decades of the twentieth centuries. Arguing that both technical and cultural factors played a role, Daniel French shows how electricity became an invisible and abstract form of energy in American society. As technological advancements allowed for an increasing physical distance between power generation and power consumption, the commodity of electricity became consciously detached from the environmentally destructive fire and coal that produced it. This development, along with cultural forces, led the public to define electricity as mysterious, utopian, and an alternative to nearby fire-based energy sources. With its adoption occurring simultaneously with Progressivism and consumerism, electricity use was encouraged and seen as an integral part of improvement and modernity, leading Americans to culturally construct electricity as unlimited and environmentally inconsequential—a newfound “basic right” of life in the United States.