Daniel Rood is assistant professor of history at the University of Georgia, Franklin College. 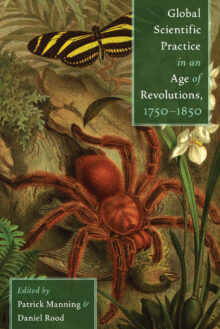 Global Scientific Practice in an Age of Revolutions, 1750-1850

The century from 1750 to 1850 was a period of dramatic transformations in world history, fostering several types of revolutionary change beyond the political landscape. Independence movements in Europe, the Americas, and other parts of the world were catalysts for radical economic, social, and cultural reform. And it was during this age of revolutions—an era of rapidly expanding scientific investigation—that profound changes in scientific knowledge and practice also took place.

In this volume, an esteemed group of international historians examines key elements of science in societies across Spanish America, Europe, West Africa, India, and Asia as they overlapped each other increasingly. Chapters focus on the range of participants in eighteenth- and nineteenth-century science, their concentrated effort in description and taxonomy, and advances in techniques for sharing knowledge. Together, contributors highlight the role of scientific change and development in tightening global and imperial connections, encouraging a deeper conversation among historians of science and world historians and shedding new light on a pivotal moment in history for both fields.