David E. Fishman is professor of Jewish history at the Jewish Theological Seminary of America in New York. He is the author of Russia’s First Modern Jews and editor of From Mesopotamia to Modernity: Ten Introductions to Jewish History and Literature. 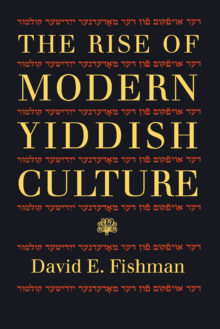 The Rise of Modern Yiddish Culture

The Rise of Modern Yiddish Culture explores the transformation of Yiddish from a low-status vernacular to the medium of a complex modern culture. David Fishman examines the efforts of east European Jews to establish their linguistic distinctiveness as part of their struggle for national survival in the diaspora. Fishman considers the roots of modern Yiddish culture in social and political conditions in Imperial Tsarist and inter-war Poland, and its relationship to Zionism and Bundism. In so doing, Fishman argues that Yiddish culture enveloped all socioeconomic classes, not just the proletarian base, and considers the emergence, at the turn of the century, of a pro-Yiddish intelligentsia and a Yiddishist movement.As Fishman points out, the rise of Yiddishism was not without controversy. Some believed that the rise of Yiddish represented a shift away from a religious-dominated culture to a completely secular, European one; a Jewish nation held together by language, rather than by land or religious content. Others hoped that Yiddish culture would inherit the moral and national values of the Jewish religious tradition, and that to achieve this result, the Bible and Midrash would need to exist in modern Yiddish translation. Modern Yiddish culture developed in the midst of these opposing concepts.Fishman follows the rise of the culture to its apex, the founding of the Yiddish Scientific Institute (YIVO) in Vilna in 1925, and concludes with the dramatic story of the individual efforts that preserved the books and papers of YIVO during the destruction and annihilation of World War II and in postwar Soviet Lithuania. The Rise of Modern Yiddish Culture, like those efforts, preserves the cultural heritage of east European Jews with thorough research and fresh insights.