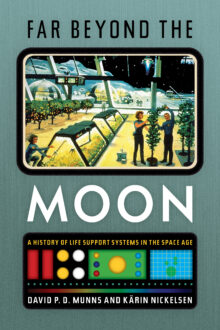 Far Beyond the Moon

A History of Life Support Systems in the Space Age

From the beginning of the space age, scientists and engineers have worked on systems to help humans survive for the astounding 28,500 days (78 years) needed to reach another planet. They’ve imagined and tried to create a little piece of Earth in a bubble travelling through space, inside of which people could live for decades, centuries, or even millennia. Far Beyond the Moon tells the dramatic story of engineering efforts by astronauts and scientists to create artificial habitats for humans in orbiting space stations, as well as on journeys to Mars and beyond. Along the way, David P. D. Munns and Kärin Nickelsen explore the often unglamorous but very real problem posed by long-term life support: How can we recycle biological wastes to create air, water, and even food in meticulously controlled artificial environments? Together, they draw attention to the unsung participants of the space program—the sanitary engineers, nutritionists, plant physiologists, bacteriologists, and algologists who created and tested artificial environments for space based on chemical technologies of life support—as well as the bioregenerative algae systems developed to reuse waste, water, and nutrients, so that we might cope with a space journey of not just a few days, but months, or more likely, years. 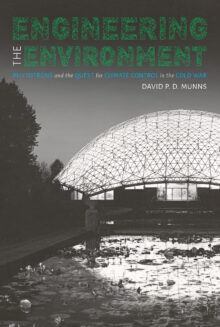 Phytotrons and the Quest for Climate Control in the Cold War

Promising an end to global hunger and political instability, huge climate-controlled laboratories known as phytotrons spread around the world to thirty countries after the Second World War. The United States built nearly a dozen, including the first at Caltech in 1949. Made possible by computers and other novel greenhouse technologies of the early Cold War, phytotrons enabled plant scientists to experiment on the environmental causes of growth and development of living organisms. Subsequently, they turned biologists into technologists who, in their pursuit of knowledge about plants, also set out to master the machines that controlled their environment.

Engineering the Environment tells the forgotten story of a research program that revealed the shape of the environment, the limits of growth and development, and the limits of human control over complex technological systems. As support and funding for basic science dwindled in the mid-1960s, phytotrons declined and ultimately disappeared—until, nearly thirty years later, the British built the Ecotron to study the impact of climate change on biological communities. By revisiting this history of phytotrons, David Munns reminds us of the vital role they can play in helping researchers unravel the complexities of natural ecosystems in the Anthropocene.