David Philip Miller is emeritus professor of history of science at the University of New South Wales, Sydney. He is a fellow of the Australian Academy of Humanities and a member of the International Academy of the History of Science. 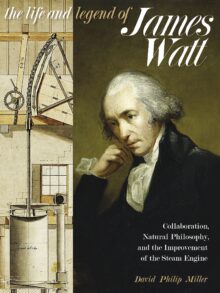 The Life and Legend of James Watt

Collaboration, Natural Philosophy, and the Improvement of the Steam Engine

The Life and Legend of James Watt offers a deeper understanding of the work and character of the great eighteenth-century engineer. Stripping away layers of legend built over generations, David Philip Miller finds behind the heroic engineer a conflicted man often diffident about his achievements but also ruthless in protecting his inventions and ideas, and determined in pursuit of money and fame. A skilled and creative engineer, Watt was also a compulsive experimentalist drawn to natural philosophical inquiry, and a chemistry of heat underlay much of his work, including his steam engineering. But Watt pursued the business of natural philosophy in a way characteristic of his roots in the Scottish “improving” tradition that was in tension with Enlightenment sensibilities. As Miller demonstrates, Watt’s accomplishments relied heavily on collaborations, not always acknowledged, with business partners, employees, philosophical friends, and, not least, his wives, children, and wider family. The legend created in his later years and “afterlife” claimed too much of nineteenth-century technology for Watt, but that legend was, and remains, a powerful cultural force. 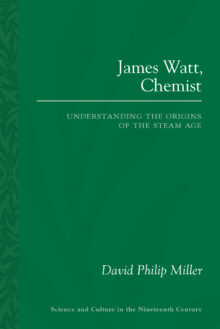 Understanding the Origins of the Steam Age

In the Victorian era, James Watt became an iconic engineer, but in his own time he was also an influential chemist. Miller examines Watt’s illustrious engineering career in light of his parallel interest in chemistry, arguing that Watt’s conception of steam engineering relied upon chemical understandings.

Part I of the book—Representations—examines the way James Watt has been portrayed over time, emphasizing sculptural, pictorial and textual representations from the nineteenth century. As an important contributor to the development of arguably the most important technology of industrialization, Watt became a symbol that many groups of thinkers were anxious to claim. Part II—Realities—focuses on reconstructing the unsung “chemical Watt” instead of the lionized engineer.