Diane Davis is associate professor of Rhetoric & Writing and English at the University of Texas at Austin, and she holds the Kenneth Burke Chair of Rhetoric at the European Graduate School in Saas-Fee, Switzerland. Davis is the author of Breaking Up [at] Totality: A Rhetoric of Laughter, coauthor of Women’s Ways of Making It in Rhetoric and Composition, and editor of Reading Ronell and The UberReader: Selected Works of Avital Ronell. 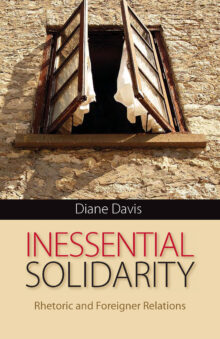 In Inessential Solidarity, Diane Davis examines critical intersections of rhetoric and sociality in order to revise some of rhetorical theoryÆs basic presumptions. Rather than focus on the arguments and symbolic exchanges through which social relations are defined, Davis exposes an underivable rhetorical imperative, an obligation to respond that is as undeniable as the obligation to age. Situating this response-ability as the condition for, rather than the effect of, symbolic interaction, Davis both dissolves contemporary concerns about linguistic overdetermination and calls into question long-held presumptions about rhetoricÆs relationship with identification, figuration, hermeneutics, agency, and judgment. Spotlighting a rhetorical “situation” irreducible to symbolic relations, Davis proposes quite provocatively that rhetoric&mdash;rather than ontology (Aristotle/Heidegger), epistemology (Descartes), or ethics (Levinas)&mdash;is “first philosophy.” The subject or “symbol-using animal” comes into being, Davis argues both with and against Emmanuel Levinas, only inasmuch as it responds to the other; the priority of the other is not a matter of the subject’s choice, then, but of its inescapable predicament. Directing the readerÆs attention to this inessential solidarity without which no meaning-making or determinate social relation would be possible, Davis aims to nudge rhetorical studies beyond the epistemological concerns that typically circumscribe theories of persuasion toward the examination of a more fundamental affectability, persuadability, responsivity.