Diarmid A. Finnegan is senior lecturer in human geography at Queen’s University, Belfast. He is the author of Natural History Societies and Civic Culture in Victorian Scotland and coeditor of Spaces of Global Knowledge: Exhibition, Encounter and Exchange in an Age of Empire and The Correspondence of John Tyndall, volume 7. His current research centers on the history of science and religion in the nineteenth and early twentieth centuries.

The Voice of Science

British Scientists on the Lecture Circuit in Gilded Age America

By Diarmid A. Finnegan

For many in the nineteenth century, the spoken word had a vivacity and power that exceeded other modes of communication. This conviction helped to sustain a diverse and dynamic lecture culture that provided a crucial vehicle for shaping and contesting cultural norms and beliefs. As science increasingly became part of public culture and debate, its spokespersons recognized the need to harness the presumed power of public speech to recommend the moral relevance of scientific ideas and attitudes. With this wider context in mind, The Voice of Science explores the efforts of five celebrity British scientists—John Tyndall, Thomas Henry Huxley, Richard Proctor, Alfred Russel Wallace, and Henry Drummond—to articulate and embody a moral vision of the scientific life on American lecture platforms. These evangelists for science negotiated the fraught but intimate relationship between platform and newsprint culture and faced the demands of audiences searching for meaningful and memorable lecture performances. As Diarmid Finnegan reveals, all five attracted unrivaled attention, provoking responses in the press, from church pulpits, and on other platforms. Their lectures became potent cultural catalysts, provoking far-reaching debate on the consequences and relevance of scientific thought for reconstructing cultural meaning and moral purpose. 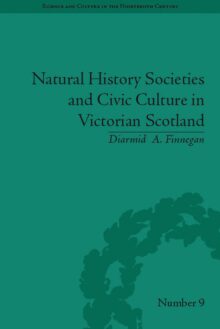 By Diarmid A. Finnegan

The relationship between science and civil society is essential to our understanding of cultural change during the Victorian era. Science was frequently packaged as an appropriate form of civic culture, inculcating virtues necessary for civic progress. In turn, civic culture was presented as an appropriate context for enabling and supporting scientific progress. Finnegan’s study looks at the shifting nature of this process during the nineteenth century, using Scotland as the focus for his argument. Considerations of class, religion and gender are explored, illuminating changing social identities as public interest in science was allowed—even encouraged—beyond the environs of universities and elite metropolitan societies. 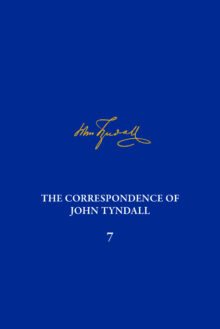 Correspondence of John Tyndall, Volume 7, The

The 308 letters in this volume cover a critical period in Tyndall’s personal and scientific lives. The volume begins with the difficult ending of his relationship with the Drummond family, disputes about his work in glaciology, and his early seminal work on the absorption of radiant heat by gases. It ends with the start of his championship of Julius Robert Mayer’s work on the mechanical equivalent of heat. In between, Tyndall carefully establishes his own priority for his work on radiant heat, and he accepts the position of professor of physics at the Government School of Mines. The lure of the Alps also becomes ever stronger. In this period comes perhaps Tyndall’s greatest mountaineering achievement, the first ascent of the Weisshorn, and a remarkable winter visit to Chamonix and the Mer de Glace. As his reputation grows, Tyndall continues to make his way in society. He is elected to the elite Athenaeum Club on January 31, 1860.