Dick Thornburgh and his wife live in Washington, D.C., where he is counsel to the law firm of Kirkpatrick & Lockhart LLP. His four sons and six grandchildren live in Pennsylvania. 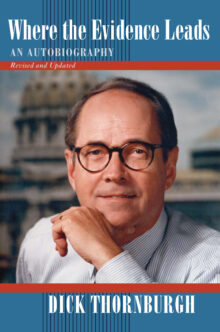 Where the Evidence Leads

An Autobiography, Revised and Updated

p.p1 {margin: 0.0px 0.0px 0.0px 0.0px; line-height: 12.0px; font: 10.0px ‘Lucida Grande’; color: #000000; -webkit-text-stroke: #000000; background-color: #ffffff} span.s1 {font-kerning: none} Set in any era, Dick Thornburgh’ss brilliant career would merit study and retelling. He was the first Republican elected to two successive terms as governor of Pennsylvania. He served in the Department of Justice under five presidents, including three years as attorney general for Presidents Reagan and Bush. As undersecretary-general of the United Nations, he was the highest-ranking American in the organization and a strong voice for reform. Nationally, Thornburgh is best remembered for his three years as attorney general, when he managed some of the most vexing legal matters of the modern age: the Savings and Loan and BCCI scandals; controversy over the ’”Iraqgate” and INSLAW investigations and the Wichita abortion clinic protests; and prosecutions of Michael Milken, Manuel Noriega, and Marion Barry, as well as those involved in the Pan Am Flight 103 bombing, the Exxon Valdez oil spill, and the Rodney King beating. As governor of Pennsylvania, he faced the nation’s worst nuclear accident, weeks after his inauguration in 1979. Thornburgh’s cool-headed response to the Three Mile Island disaster is often studied as a textbook example of emergency management. His historic 1992 battle against Harris Wofford for the late John Heinz III’s Senate seat is one of several political campaigns, vividly recalled, that reveal the inner workings of the commonwealth’s political machinery. Thornburgh reveals painful details of his personal life, including the automobile accident that claimed the life of his first wife and permanently disabled his infant son. He presents a frank analysis of the challenges of raising a family as a public figure, and tells the moving story of his personal and political crusade that culminated in the Americans with Disabilities Act of 1990.This revised and updated edition includes a new chapter devoted to the highlights of Thornburgh’s continuing career. He offers fascinating insights into his experiences as Bankruptcy Court Examiner for the WorldCom proceedings, leading the investigation into the CBS News report on President George W. Bush’s military service record, representing Allegheny County coroner Cyril Wecht in a trial over alleged misuse of public office, and as part of the K&L Gates team consulted by Chiquita Brands during a federal investigation over payments made to Colombian guerillas and paramilitaries to protect banana growers.