Dieter Schott is professor of modern history at Darmstadt University of Technology, Germany. 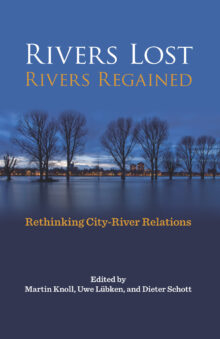 Many cities across the globe are rediscovering their rivers. After decades or even centuries of environmental decline and cultural neglect, waterfronts have been vamped up and become focal points of urban life again; hidden and covered streams have been daylighted while restoration projects have returned urban rivers in many places to a supposedly more natural state. This volume traces the complex and winding history of how cities have appropriated, lost, and regained their rivers. But rather than telling a linear story of progress, the chapters of this book highlight the ambivalence of these developments.

The four sections in Rivers Lost, Rivers Regained discuss how cities have gained control and exerted power over rivers and waterways far upstream and downstream; how rivers and floodplains in cityscapes have been transformed by urbanization and industrialization; how urban rivers have been represented in cultural manifestations, such as novels and songs; and how more recent strategies work to redefine and recreate the place of the river within the urban setting. At the nexus between environmental, urban, and water histories, Rivers Lost, Rivers Regained points out how the urban-river relationship can serve as a prime vantage point to analyze fundamental issues of modern environmental attitudes and practices.