Dietrich Rueschemeyer is a research professor at the Watson Institute for International Studies at Brown University, and the coauthor of Capitalist Development and Democracy. 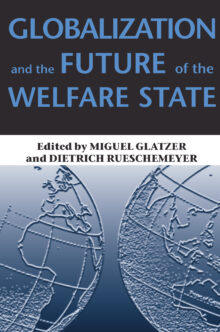 Globalization and the Future of the Welfare State

In the last quarter of the twentieth century, the global political economy has undergone a profound transformation. Democracy has swept the globe, and both rich and developing nations must compete in an increasingly integrated world economy.
How are social welfare policies being affected by this wave of economic globalization? Leading researchers explore the complex question in this new comparative study. Shifting their focus from the more commonly studied, established welfare states of northwestern Europe, the authors of Globalization and the Future of the Welfare State examine policy development in the middle-income countries of southern and eastern Europe, Latin America, Russia, and East Asia.
Previous investigations into the effects of globalization on welfare states have generally come to one of two conclusions. The first is that a global economy undermines existing welfare states and obstructs new developments in social policy, as generous provisions place a burden on a nation's resources and its ability to compete in the international marketplace. In contrast, the second builds on the finding that economic openness is positively correlated with greater social spending, which suggests that globalization and welfare states can be mutually reinforcing.
Here the authors find that globalization and the success of the welfare state are by no means as incompatible as the first view implies. The developing countries analyzed demonstrate that although there is great variability across countries and regions, domestic political processes and institutions play key roles in managing the disruptions wrought by globalization.