Donald C. Jackson is professor of history at Lafayette College. He is the author of Great American Bridges and Dams and Building the Ultimate Dam: John S. Eastwood and the Control of Water in the West, and coauthor of Big Dams of the New Deal Era: A Confluence of Engineering and Politics. 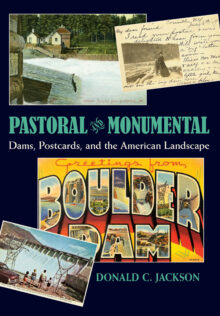 Dams, Postcards, and the American Landscape

In Pastoral and Monumental, Donald C. Jackson chronicles America’s longtime fascination with dams as represented on picture postcards from the late nineteenth to the mid-twentieth century. Through over four hundred images, Jackson documents the remarkable transformation of dams and their significance to the environment and culture of America.
Initially, dams were portrayed in pastoral settings on postcards that might jokingly proclaim them as “a dam pretty place.” But scenes of flood damage, dam collapses, and other disasters also captured people’s attention. Later, images of New Deal projects, such as the Hoover Dam, Grand Coulee Dam, and Norris Dam, symbolized America’s rise from the Great Depression through monumental public works and technological innovation. Jackson relates the practical applications of dams, describing their use in irrigation, navigation, flood control, hydroelectric power, milling, mining, and manufacturing. He chronicles changing construction techniques, from small timber mill dams to those more massive and more critical to a society dependent on instant access to electricity and potable water.

Concurrent to the evolution of dam technology, Jackson recounts the rise of a postcard culture that was fueled by advances in printing, photography, lowered postal rates, and America’s fascination with visual imagery. In 1910, almost one billion postcards were mailed through the U.S. Postal Service, and for a period of over fifty years, postcards featuring dams were “all the rage.” Whether displaying the charms of an old mill, the aftermath of a devastating flood, or the construction of a colossal gravity dam, these postcards were a testament to how people perceived dams as structures of both beauty and technological power.