Donald J. Raleigh, Pardue Professor of History at the University of North Carolina at Chapel Hill, is the author, editor, or translator of numerous books and articles, including most recently, The Emperors and Empresses of Russia: Rediscovering the Romanovs and Labor Camp Socialism: The Gulag in the Soviet Totalitarian System. 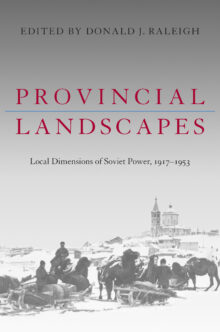 The closed nature of the Soviet Union, combined with the WestÆs intellectual paradigm of Communist totalitarianism prior to the 1970s, have led to a one-dimensional view of Soviet history, both in Russia and the West. The opening of former Soviet archives allows historians to explore a broad array of critical issues at the local level. Provincial Landscapes is the first publication to begin filling this enormous gap in scholarship on the Soviet Union, pointing the way to additional work that will certainly force major reevaluations of the nationÆs history.Focusing on the years between the Revolution and StalinÆs death, the contributors to this volume address a variety of topics, including how political events and social engineering played themselves out at the local level; the construction of Bolshevik identities, including class, gender, ethnicity, and place; the Soviet cultural project; and the hybridization of Soviet cultural forms. In showing how the local is related to the larger society, the essays decenter standard narratives of Soviet history, enrich the understanding of major events and turning points in that history, and provide a context for the highly visible socio-political and cultural role individual Russian provinces began to play after the breakup of the Soviet Union.