Dorothée Imbert is associate professor of landscape architecture at Harvard University. She is the author of The Modernist Garden in France and coauthor of Garrett Eckbo: Modern Landscapes for Living. 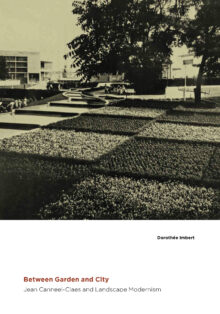 Between Garden and City

In Between Garden and City, Dorothée Imbert examines the career of Belgian landscape architect Jean Canneel-Claes (1909-1989), firmly establishing his place in the modernist movement. Canneel’s theoretical positions and innovative designs sought to align the emergent landscape profession with architecture and urbanism while demonstrating its potential to address the needs of modern society. Canneel studied at La Cambre (Belgium’s equivalent to the Bauhaus) under landscape urbanist Louis van der Swaelmen and graduated as the school’s first landscape architect in 1931. Dedicated to connecting architecture and garden design, he commissioned a house from Le Corbusier and collaborated with prominent Belgian modernist architects Louis Herman De Koninck, Huib Hoste, and Victor Bourgeois. Seeing the garden as part of a larger design environment, Canneel expanded the scale of his interventions to urban greening and the planning of cities. In 1938, Canneel joined forces with Christopher Tunnard to found the International Association of Modernist Garden Architects and further the cause of landscape modernism across Europe. Two years later, Canneel applied his theory of the functionalist garden to postwar reconstruction with designs for cemeteries, sports grounds, and town squares. Imbert examines the social context and the aesthetic and theoretical influences that shaped Canneel’s work. She positions him as a major figure at the confluence of art, architecture, and urbanism in the early twentieth century and opens new avenues for understanding the relationship of modernism to gardens, nature, and the city.