E. Gabrielle Kuenzli is assistant professor of history at the University of South Carolina. 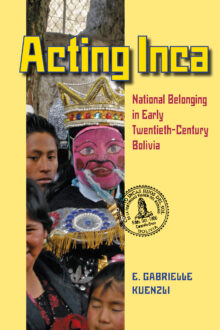 For most of the postcolonial era, the Aymara Indians of highland Bolivia were a group without representation in national politics. Believing that their cause would finally be recognized, the Aymara fought alongside the victorious liberals during the Civil War of 1899. Despite Aymara loyalty, liberals quickly moved to marginalize them after the war. In her groundbreaking study, E. Gabrielle Kuenzli revisits the events of the civil war and its aftermath to dispel popular myths about the Aymara and reveal their forgotten role in the nation-building project of modern Bolivia.

Kuenzli examines documents from the famous postwar Peu00f1as Trial to recover Aymara testimony during what essentially became a witch hunt. She reveals that the Aymara served as both dutiful plaintiffs allied with liberals and unwitting defendants charged with wartime atrocities and instigating a race war.

To further combat their “Indian problem,” Creole liberals developed a public discourse that positioned the Inca as the only Indians worthy of national inclusion. This was justified by the Incas’ high civilization and reputation as noble conquerors, along with their current non-threatening nature. The “whitening” of Incans was a thinly veiled attempt to block the Aymara from politics, while also consolidating the power of the Liberal Party.

Kuenzli posits that despite their repression, the Aymara did not stagnate as an idle, apolitical body after the civil war. She demonstrates how the Aymara appropriated the liberal’s Indian discourse by creating theatrical productions that glorified Incan elements of the Aymara past. In this way, the Aymara were able to carve an acceptable space as “progressive Indians” in society. Kuenzli provides an extensive case study of an “Inca play” created in the Aymara town of Caracollo, which proved highly popular and helped to unify the Aymara.

As her study shows, the Amyara engaged liberal Creoles in a variety of ways at the start of the twentieth century, shaping national discourse and identity in a tradition of activism that continues to this day.