Eduardo Elena is assistant professor of history at the University of Miami. 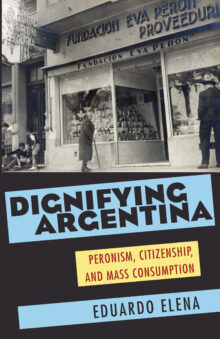 During the mid-twentieth century, Latin American countries witnessed unprecedented struggles over the terms of national sovereignty, civic participation, and social justice. Nowhere was this more visible than in Peronist Argentina (1946&ndash;1955), where Juan and Eva Perón led the regionÆs largest populist movement in pursuit of new political hopes and material desires. Eduardo Elena considers this transformative moment from a fresh perspective by exploring the intersection of populism and mass consumption. He argues that Peronist actors redefined national citizenship around expansive promises of a vida digna (dignified life), which encompassed not only the satisfaction of basic wants, but also the integration of working Argentines into a modern consumer society. From the mid-1940s onward, the state moved to boost purchasing power and impose discipline on the marketplace, all while broadcasting images of a contented populace.

Drawing on documents such as the correspondence between Peronist sympathizers and authorities, Elena sheds light on the contest over the dignified life. He shows how the consumer aspirations of citizens overlapped with Peronist paradigms of state-led development, but not without generating great friction among allies and opposition from diverse sectors of society. Consumer practices encouraged intense public scrutiny of class and gender comportment, and everyday objects became freighted with new cultural meaning. By providing important insights on why Peronism struck such a powerful chord, Dignifying Argentina situates Latin America within the broader history of citizenship and consumption at mid-century, and provides innovative ways to understand the politics of redistribution in the region today.