Efram Sera-Shriar is a Copenhagen-based historian and writer. He received his PhD from the University of Leeds and has worked in higher education and the museum sector for nearly twenty years. As an associate professor in English studies at the University of Copenhagen, he teaches about the history and culture of the English-speaking world. He is also associate director of research for the Centre for Nineteenth-Century Studies International at Durham University. Prior to taking on these roles, he was a senior researcher and research grants manager for the Science Museum Group in the UK and lecturer of modern history at Leeds Trinity University. 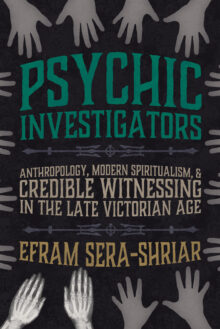 Psychic Investigators examines British anthropology’s engagement with the modern spiritualist movement during the late Victorian era. Efram Sera-Shriar argues that debates over the existence of ghosts and psychical powers were at the center of anthropological discussions on human beliefs. He focuses on the importance of establishing credible witnesses of spirit and psychic phenomena in the writings of anthropologists such as Alfred Russel Wallace, Edward Burnett Tylor, Andrew Lang, and Edward Clodd. The book draws on major themes, such as the historical relationship between science and religion, the history of scientific observation, and the emergence of the subfield of anthropology of religion in the second half of the nineteenth century. For secularists such as Tylor and Clodd, spiritualism posed a major obstacle in establishing the legitimacy of the theory of animism: a core theoretical principle of anthropology founded in the belief of “primitive cultures” that spirits animated the world, and that this belief represented the foundation of all religious paradigms. What becomes clear through this nuanced examination of Victorian anthropology is that arguments involving spirits or psychic forces usually revolved around issues of evidence, or lack of it, rather than faith or beliefs or disbeliefs. 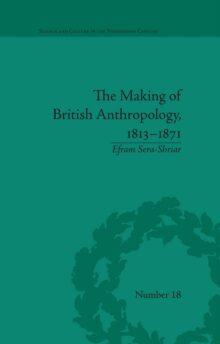 Victorian anthropology has been derided as an “armchair practice,” distinct from the scientific discipline of the twentieth century. But the observational practices that characterized the study of human diversity developed from the established sciences of natural history, geography and medicine. Sera-Shriar argues that anthropology at this time went through a process of innovation which built on scientifically grounded observational study. Far from being an evolutionary dead end, nineteenth-century anthropology laid the foundations for the field-based science of anthropology today. 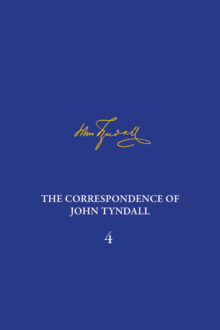 The Correspondence of John Tyndall, Volume 4

The 329 letters in this volume represent a period of immense transition in John Tyndall’s life. A noticeable spike in his extant correspondence during the early 1850s is linked to his expanding international network, growing reputation as a leading scientific figure in Britain and abroad, and his employment at the Royal Institution. By December 1854, Tyndall had firmly established himself as a significant man of science, complete with an influential position at the center of the British scientific establishment.

Tyndall’s letters throughout the period covered by this volume provide great insight into how he navigated a complicated course that led him into the upper echelons of the Victorian scientific world. And yet, while Tyndall was no longer as anxious about his scientific future as he was in previous volumes of his correspondence, these letters show a man struggling to come to terms with his newfound status, a struggle that was often reflected in his obsession with maintaining an “inflexible integrity” that guided his actions and deeds. 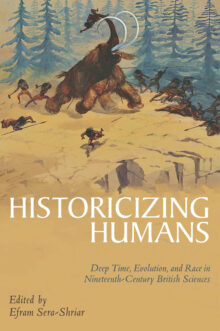 With an Afterword by Theodore Koditschek

A number of important developments and discoveries across the British Empire’s imperial landscape during the nineteenth century invited new questions about human ancestry. The rise of secularism and scientific naturalism; new evidence, such as skeletal and archaeological remains; and European encounters with different people all over the world challenged the existing harmony between science and religion and threatened traditional biblical ideas about special creation and the timeline of human history. Advances in print culture and voyages of exploration also provided researchers with a wealth of material that contributed to their investigations into humanity’s past.

Historicizing Humans takes a critical approach to nineteenth-century human history, as the contributors consider how these histories were shaped by the colonial world, and for various scientific, religious, and sociopolitical purposes. This volume highlights the underlying questions and shared assumptions that emerged as various human developmental theories competed for dominance throughout the British Empire.