Elizabeth Shesko is assistant professor of history at Oakland University in Rochester, Michigan. 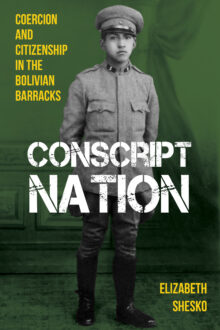 Coercion and Citizenship in the Bolivian Barracks

Military service in Bolivia has long been compulsory for young men. This service plays an important role in defining identity, citizenship, masculinity, state formation, and civil-military relations in twentieth-century Bolivia. The project of obligatory military service originated as part of an attempt to restrict the power of indigenous communities after the 1899 civil war. During the following century, administrations (from oligarchic to revolutionary) expressed faith in the power of the barracks to assimilate, shape, and educate the population. Drawing on a body of internal military records never before used by scholars, Elizabeth Shesko argues that conscription evolved into a pact between the state and society. It not only was imposed from above but was also embraced from below because it provided a space for Bolivians across divides of education, ethnicity, and social class to negotiate their relationships with each other and with the state. Shesko contends that state formation built around military service has been characterized in Bolivia by multiple layers of negotiation and accommodation. The resulting nation-state was and is still hierarchical and divided by profound differences, but it never was simply an assimilatory project. It instead reflected a dialectical process to define the state and its relationships.