Emily Pugh is Robert H. Smith postdoctoral research associate at the Center for the Advanced Study in the Visual Arts, National Gallery of Art in Washington, DC. 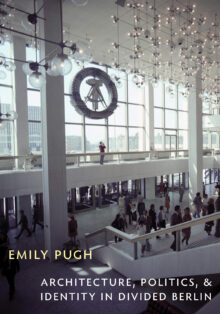 On August 13, 1961, under the cover of darkness, East German authorities sealed the border between East and West Berlin using a hastily constructed barbed wire fence. Over the next twenty-eight years of the Cold War, the Berlin Wall grew to become an ever-present physical and psychological divider in this capital city and a powerful symbol of Cold War tensions. Similarly, stark polarities arose in nearly every aspect of public and private life, including the built environment.

In Architecture, Politics, and Identity in Divided Berlin Emily Pugh provides an original comparative analysis of selected works of architecture and urban planning in both halves of Berlin during the Wall era, revealing the importance of these structures to the formation of political, cultural, and social identities. Pugh uncovers the roles played by organizations such as the Foundation for Prussian Cultural Heritage and the Building Academy in conveying the political narrative of their respective states through constructed spaces. She also provides an overview of earlier notable architectural works, to show the precursors for design aesthetics in Berlin at large, and considers projects in the post-Wall period, to demonstrate the ongoing effects of the Cold War.

Overall, Pugh offers a compelling case study of a divided city poised between powerful contending political and ideological forces, and she highlights the effort expended by each side to influence public opinion in Europe and around the World through the manipulation of the built environment.