Enrique Garcia is associate professor of Spanish at Middlebury College. He is the author of Cuban Cinema After the Cold War. 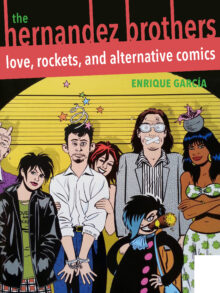 This study offers a critical examination of the work of Gilbert and Jaime Hernandez, Mexican-American brothers whose graphic novels are highly influential. The Hernandez brothers started in the alt-comics scene, where their 'Love and Rockets' series quickly gained prominence. They have since published in more mainstream venues but have maintained an outsider status based on their own background and the content of their work. Enrique García argues that the Hernandez brothers have worked to create a new American graphic storytelling that, while still in touch with mainstream genres, provides a transgressive alternative from an aesthetic, gender, and ethnic perspective. The brothers were able to experiment with and modify these genres by taking advantage of the editorial freedom of independent publishing. This freedom also allowed them to explore issues of ethnic and gender identity in transgressive ways. Their depictions of latinidad and sexuality push against the edicts of mainstream Anglophone culture, but they also defy many Latino perceptions of life, politics, and self-representation. The book concludes with an in-depth interview with Jaime and Gilbert Hernandez that touches on and goes beyond the themes explored in the book.