Eric Zolov, assistant professor of history at Franklin & Marshall College, is author of Refried Elvis: The Rise of the Mexican Counterculture. 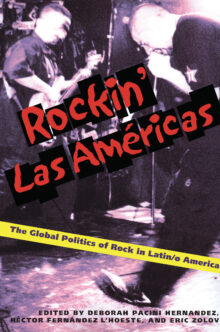 The Global Politics Of Rock In Latin/o America

Every nation in the Americas&mdash;from indigenous Peru to revolutionary Cuba&mdash;has been touched by the cultural and musical impact of rock. Rockin’ Las Américas is the first book to explore the production, dissemination, and consumption of rock music throughout the Caribbean, Mexico, Central America, Brazil, the Andes, and the Southern Cone as well as among Latinos in the United States.

The contributors include experts in music, history, literature, culture, sociology, and anthropology, as well as practicing <I>rockeros</I> and <I>rockeras</I>. The multidisciplinary, transnational, and comparative perspectives they bring to the topic serve to address a broad range of fundamental questions about rock in Latin and Latino America, including: Why did rock become such a controversial cultural force in the region? In what ways has rock served as a medium for expressing national identities? How are unique questions of race, class, and gender inscribed in Latin American rock? What makes Latin American rock Latin American? <I>Rockin’ Las Américas</I> is an essential book for anyone who hopes to understand the complexities of Latin American culture today.