Erik L. Peterson is assistant professor of history at the University of Alabama. 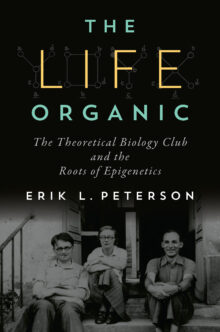 The Theoretical Biology Club and the Roots of Epigenetics

As scientists debated the nature of life in the nineteenth century, two theories predominated: vitalism, which suggested that living things contained a “vital spark,” and mechanism, the idea that animals and humans differed from nonliving things only in their degree of complexity. Erik Peterson tells the forgotten story of the pursuit of a Third Way in biology, known by many names, including “the organic philosophy,” which gave rise to C. H. Waddington’s work in the subfield of epigenetics: an alternative to standard genetics and evolutionary biology that captured the attention of notable scientists from Francis Crick to Stephen Jay Gould. The Life Organic chronicles the influential biologists, mathematicians, philosophers, and biochemists from both sides of the Atlantic who formed Joseph Needham’s Theoretical Biology Club, defined and refined Third-Way thinking through the 1930s, and laid the groundwork for some of the most cutting-edge achievements in biology today. By tracing the persistence of organicism into the twenty-first century, this book also raises significant questions about how we should model the development of the discipline of biology going forward.