Ernest Stromberg is associate professor in the Department of English, Communication, and Journalism at California State University, Monterey Bay. 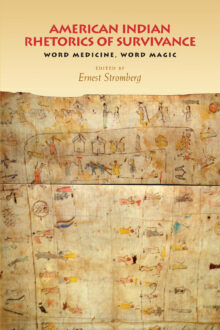 American Indian Rhetorics of Survivance presents an original critical and theoretical analysis of American Indian rhetorical practices in both canonical and previously overlooked texts: autobiographies, memoirs, prophecies, and oral storytelling traditions. Ernest Stromberg assembles essays from a range of academic disciplines that investigate the rhetorical strategies of Native American orators, writers, activists, leaders, and intellectuals.
The contributors consider rhetoric in broad terms, ranging from Aristotle's definition of rhetoric as &ldquo;the faculty . . . of discovering in the particular case what are the available means of persuasion,&rdquo; to the ways in which Native Americans assimilated and revised Western rhetorical concepts and language to form their own discourse with European and American colonists. They relate the power and use of rhetoric in treaty negotiations, written accounts of historic conflicts and events, and ongoing relations between American Indian governments and the United States.
This is a groundbreaking collection for readers interested in Native American issues and the study of language. In presenting an examination of past and present Native American rhetoric, it emphasizes the need for an improved understanding of multicultural perspectives.