Ernesto Capello is assistant professor of history at Macalester College. 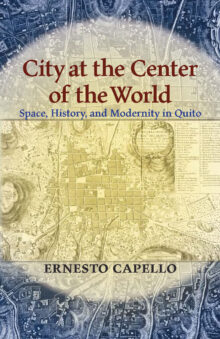 City at the Center of the World

Space, History, and Modernity in Quito

In the seventeenth century, local Jesuits and Franciscans imagined Quito as the “new Rome.” It was the site of miracles and home of saintly inhabitants, the origin of crusades into the surrounding wilderness, and the purveyor of civilization to the entire region. By the early twentieth century, elites envisioned the city as the heart of a modern, advanced society&mdash;poised at the physical and metaphysical centers of the world.

In this original cultural history, Ernesto Capello analyzes the formation of memory, myth, and modernity through the eyes of QuitoÆs diverse populations. By employing Mikhail BakhtinÆs concept of chronotopes, Capello views the configuration of time and space in narratives that defined QuitoÆs identity and its place in the world. He explores the proliferation of these imaginings in architecture, museums, monuments, tourism, art, urban planning, literature, religion, indigenous rights, and politics. To Capello, these tropes began to crystallize at the end of the nineteenth century, serving as a tool for distinct groups who laid claim to history for economic or political gain during the upheavals of modernism.

As Capello reveals, QuitoÆs society and its stories mutually constituted each other. In the process of both destroying and renewing elements of the past, each chronotope fed and perpetuated itself. Modern Quito thus emerged at the crux of Hispanism and Liberalism, as an independent global society struggling to keep the memory of its colonial and indigenous roots alive.