Michael P. Weber and Peter N. Stearns, who edited the memoir and wrote the introduction, are historians in the Department of History and Philosophy, Carnegie-Mellon University. 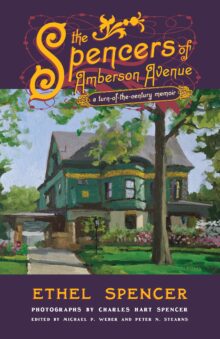 The Spencers of Amberson Avenue

This memoir introduces the family of Charles Hart Spencer and his wife Mary Acheson: seven children born between 1884 and 1895. In a large Victorian house in Shadyside, an affluent Pittsburgh neighborhood, the family begins a middle-class way of life at the turn of the century. Mr. Spencer, who worked—not very happily—for Henry Clay Frick, was one of the growing number of middle-management employees in American industrial cities in the 1880s and 1890s. His income, which supported his family of nine, a cook, two regular nurses, and at times a wet nurse and her baby, guaranteed a comfortable life but not a luxurious one. The Spencers represent a class that “too often stands silent or stereotyped as we rush forward toward the greater glamour of the robber barons or their immigrant workers.”
Through the eyes of Ethel Spencer, the third daughter, the reader is led through the routine of everyday life in the Spencer household: school, play, church on Sundays, illness, family celebrations, and vacations. Ethel was an observant child, with little sentimentality, and she wrote her memoir in later life as a professor of English at Carnegie Tech, now Carnegie Mellon University. The Spencers of Amberson Avenue offers a compelling account of middle-class Pittsburgh urban life. The book is richly illustrated with family photographs taken by Charles Spencer, who was a talented amateur photographer.