Evgeny Dobrenko is professor and department head of Russian and Slavonic Studies at the University of Sheffield. He is author, editor, or coeditor of twenty books including The Cambridge Companion to Twentieth-Century Russian Literature and Soviet Culture and Power: A History in Documents, 1917-1953. 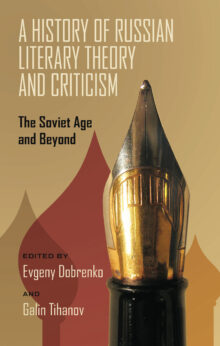 A History of Russian Literary Theory and Criticism

The Soviet Age and Beyond

The chapters follow early movements such as formalism, the Bakhtin Circle, Proletklut, futurism, the fellow-travelers, and the Russian Association of Proletarian Writers. By the cultural revolution of 1928, literary criticism became a mechanism of Soviet policies, synchronous with official ideology. The chapters follow theory and criticism into the 1930s with examinations of the Union of Soviet Writers, semantic paleontology, and socialist realism under Stalin. A more “humanized” literary criticism appeared during the ravaging years of World War II, only to be supplanted by a return to the party line, Soviet heroism, and anti-Semitism in the late Stalinist period. During KhrushchevÆs Thaw, there was a remarkable rise in liberal literature and criticism, that was later refuted in the nationalist movement of the “long” 1970s. The same decade saw, on the other hand, the rise to prominence of semiotics and structuralism. Postmodernism and a strong revival of academic literary studies have shared the stage since the start of the post-Soviet era.

For the first time anywhere, this collection analyzes all of the important theorists and major critical movements during a tumultuous ideological period in Russian history, including developments in émigré literary theory and criticism.