Frank Uekötter is professor of environmental humanities at the University of Birmingham. He is the author of more than a dozen books on a broad range of environmental, political, and socioeconomic issues. Since October 2021, he is principal investigator of the global history project “The Making of Monoculture” with generous support from a European Research Council Advanced Grant. 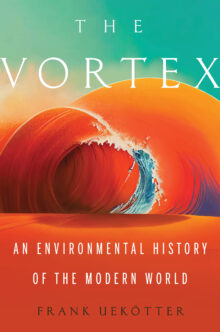 An Environmental History of the Modern World

Environmental challenges are defining the twenty-first century. To fully understand ongoing debates about our current crises—climate change, loss of biological diversity, pollution, extinction, resource woes—means revisiting their origins, in all their complexity. With this ambitious, highly original contribution to the environmental history of global modernity, Frank Uekötter considers the many ways humans have had an impact on their physical environment throughout history. Ours is not a one-way trajectory to sudden collapse, he argues, but rather death by a thousand cuts. The many paths we’ve forged to arrive in our current predicament, from agriculture to industry to infrastructure, must be considered collectively if we are to stay afloat in what Uekötter describes as a vortex: a powerful metaphor for the flow of history, capturing the momentum and the many crosscurrents that swept people and environments along. His book invites us to look at environmental challenges from multiple perspectives, including all the twists and turns that have helped to create the mess we find ourselves in. Uekötter has written a world history for an age where things are falling apart: where we know what lies ahead and are equipped with the right tools—technological and otherwise—and plenty of experience to deal with environmental challenges, but somehow fail to get our affairs in order. 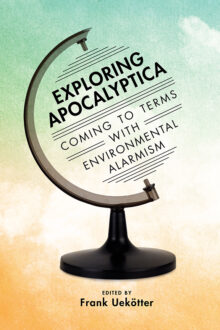 Environmental alarmism has long been a political bellwether. Tell me what you think about the green apocalypse, and I’ll tell you where you stand on the issues. But as the environmental heydays of the 1970s move into perspective, the time has come for a reassessment. Horror scenarios create a legacy whose effects have largely escaped attention. Based on case studies from four continents and the North Atlantic, Exploring Apocalyptica argues for a reevaluation of familiar clichés. It shows that environmentalists were less apocalyptic than commonly thought, and other groups were far more enthusiastic. It traces an interconnection with Cold War fears and economic depressions and demonstrates how alarmism faced limits in the Global South. It also suggests that past horror scenarios impose constraints on ongoing debates. At a time when climate change turns from a scenario into an experienced reality, this book charts paths for an age that may have already moved beyond the peak apocalypse. 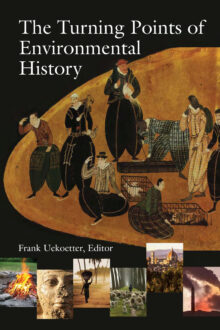 The Turning Points of Environmental History

From the time when humans first learned to harness fire, cultivate crops, and domesticate livestock, they have altered their environment as a means of survival. In the modern era, however, natural resources have been devoured and defiled in the wake of a consumerism that goes beyond mere subsistence. In this volume, an international group of environmental historians documents the significant ways in which humans have impacted their surroundings throughout history.

John McNeill introduces the collection with an overarching account of the history of human environmental impact. Other contributors explore the use and abuse of the earth’s land in the development of agriculture, commercial forestry, and in the battle against desertification in arid and semi-arid regions. Cities, which first appeared some 5,500 years ago, have posed their own unique environmental challenges, including dilemmas of solid waste disposal, sewerage, disease, pollution, and sustainable food and water supplies.

The rise of nation-states brought environmental legislation, which often meant “selling off” natural resources through eminent domain. Perhaps the most damaging environmental event in history resulted from a “perfect storm” of effects: cheap fossil fuels (especially petroleum) and the rapid rise of personal incomes during the 1950s brought an exponential increase in energy consumption and unforseen levels of greenhouse gasses to the earth’s atmosphere. By the 1970s, the deterioration of air, land, and water due to industrialization, population growth, and consumerism led to the birth of the environmental and ecological movements.

Overall, the volume points to the ability and responsibility of humans to reverse the course of detrimental trends and to achieve environmental sustainability for existing and future populations. 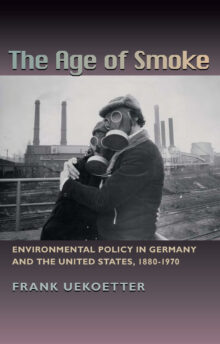 The Age of Smoke

In 1880, coal was the primary energy source for everything from home heating to industry. Regions where coal was readily available, such as the Ruhr Valley in Germany and western Pennsylvania in the United States, witnessed exponential growth-yet also suffered the greatest damage from coal pollution.

These conditions prompted civic activism in the form of “anti-smoke” campaigns to attack the unsightly physical manifestations of coal burning. This early period witnessed significant cooperation between industrialists, government, and citizens to combat the smoke problem. It was not until the 1960s, when attention shifted from dust and grime to hazardous invisible gases, that cooperation dissipated, and protests took an antagonistic turn.

The Age of Smoke presents an original, comparative history of environmental policy and protest in the United States and Germany. Dividing this history into distinct eras (1880 to World War I, interwar, post-World War II to 1970), Frank Uekoetter compares and contrasts the influence of political, class, and social structures, scientific communities, engineers, industrial lobbies, and environmental groups in each nation. He concludes with a discussion of the environmental revolution, arguing that there were indeed two environmental revolutions in both countries: one societal, where changing values gave urgency to air pollution control, the other institutional, where changes in policies tried to catch up with shifting sentiments.

Focusing on a critical period in environmental history, The Age of Smoke provides a valuable study of policy development in two modern industrial nations, and the rise of civic activism to combat air pollution. As Uekoetter's work reveals, the cooperative approaches developed in an earlier era offer valuable lessons and perhaps the best hope for future progress.