Galina Rylkova is associate professor of Russian and Slavic Studies at the University of Florida. 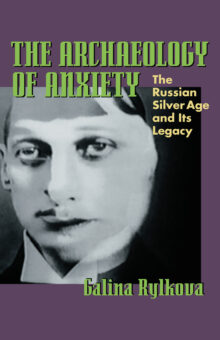 The Archaeology of Anxiety

The Russian Silver Age and its Legacy

The “Silver Age” (c. 1890-1917) has been one of the most intensely studied topics in Russian literary studies, and for years scholars have been struggling with its precise definition. Firmly established in the Russian cultural psyche, it continues to influence both literature and mass media. The Archaeology of Anxiety is the first extended analysis of why the Silver Age occupies such prominence in Russian collective consciousness.

Galina Rylkova examines the Silver Age as a cultural construct-the byproduct of an anxiety that permeated society in reaction to the social, political, and cultural upheavals brought on by the Bolshevik Revolution, the fall of the Romanovs, the Civil War, and Stalin’s Great Terror. Rylkova’s astute analysis of writings by Anna Akhmatova, Vladimir Nabokov, Boris Pasternak and Victor Erofeev reveals how the construct of the Silver Age was perpetuated and ingrained.

Rylkova explores not only the Silver Age’s importance to Russia’s cultural identity but also the sustainability of this phenomenon. In so doing, she positions the Silver Age as an essential element to Russian cultural survival.