Geoffrey Becker has worked as a tax preparer, an academic adviser, and a customer service representative for a musical electronics company. His short stories have appeared in many literary magazines, including Crazyhorse, The Colorado Review, and The North American Review. He is the recipient of a number of awards; including a James Michener grant, a PEN Syndicated Fiction Prize, and an NEA fellowship. 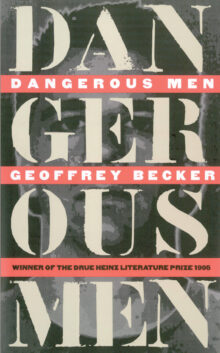 Geoffrey Becker’s Dangerous Men was selected by Charles Baxter as the winner of the fifteenth annual Drue Heinz Literature Prize. His manuscript was selected from nearly three hundred submitted by published writers.

In these tightly drafted stories, Becker creates a wide variety of distinct voices, peculiar characters, and odd stettings, with tantalizing emphasis on lonliness, loss, and the ever-present struggle to find one’s place in the world. “It was wrong to think that our presence would linger on, though it was to this notion that I realized I’d been grasping all along,” the music-student narrator of “Dangerous Men” says after an evening involving drugs, a fight, and a car accident, “the idea that in some way we were etching ourselves onto the air, leaving shadows that would remain forever.”

Many of the pieces incorporate music into the storyline. Music is a gathering point in his characters’ misfit lives. In “Magister Ludi,” a seventeen-year-old girl meets up with an older local guitarist whom her younger brother has invited over to their house when their parents are gone, and plays him for her own ends: “She makes Riggy drive right through the center of town, hoping that someone will see them – one of her friends, or one of her parents’ friends even, it doesn’t matter. She just likes the idea of being spotted in this beat-up car alongside someone so disreputable.”

In “Erin and Malcom,” a bass player with an injured hand who still lives with his estranged wife, a singer, and her pet ferret, finds out how out of tune his life really is: “Something has gone wrong – he could see it in the way she looked at him over her morning bowl of cereal, and the way she didn’t as she peeled herself out of her Lycra pants and leopard shirts at night.”

Yet , even when the music seems quiet, there are tales of choice and happenstance. “El Diablo de La Cienega,” set in New Mexico, is about a boy who accepts the challenge of a mysterious figure to a game of basketball, for very high stakes indeed. Charles Baxter – one of America’s great story writers – calls the story “a small masterpiece. It has formal perfection, like a folktale. I thought it was wonderful.”

With leaps from the funny to the sad and the revelatory, these amazing stories explore dreams and longing with remarkable insight and imagination. These are stories you will not forget.