Gregg Bocketti is professor of history at Transylvania University in Lexington, Kentucky. He is the author of The Invention of the Beautiful Game: Football and the Making of Modern Brazil. 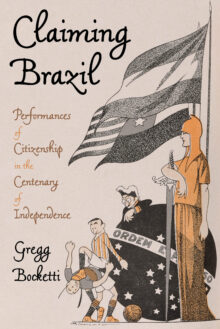 Performances of Citizenship in the Centenary of Independence

Brazil marked its centennial as an independent country in 1922. Claiming Brazil explores how Brazilians from different walks of life commemorated the event, and how this led to conflicting ideas of national identity. Civic rituals hold enormous significance, and Brazilian citizens, immigrants, and visitors employed them to articulate and perform their sense of what Brazil was, stood for, and could be. Gregg Bocketti argues that these celebrations, rather than uniting the country, highlighted tensions between modernity and tradition, over race and ethnicity, and between nation and region. Further, the rituals contributed to the collapse of the country’s social and political status quo and gave substance to the debates and ideas that characterized Brazilian life in the 1920s and then under the transformative rule of Getúlio Vargas (1930–1945). Now, at the bicentennial of Brazil’s independence, which itself unfolds in a period of political crisis and economic dislocation, and in the aftermath of several large civic events, it is an opportune moment to consider how Brazilians used civic rituals to engage with questions of identity, belonging, and citizenship one hundred years ago.