Gregory Carleton, associate professor of Russian at Tufts University and an associate at the Davis Center for Russian and Eurasian Studies at Harvard University, is the author of The Politics of Reception: Critical Constructions of Mikhail Zoshchenko. 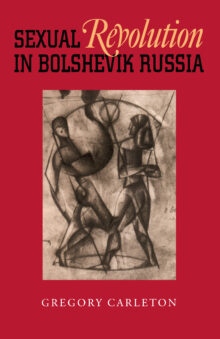 Gregory Carleton offers a comprehensive literary and cultural history of sex and society in the Soviet Union during the 1920s. The Bolshevik Revolution promised a total transformation of Russian society, down to its most intimate details. But in the years immediately following 1917, it was by no means clear how this would come about. Sex and sexuality became a crucial battleground for debates about the Soviet future, and literature emerged as a primary domain through which sex could be imagined and discussed.Despite optimistic claims that bolshevism would overcome bourgeois depravity, the writings of the 1920s in all genres were awash in sexual adventure, promiscuity, various chauvinisms, date and gang rape, unwanted pregnancy, and sexually transmitted diseases, as well as sex-related alcohol abuse, depression, and suicide. In discussions about sex, party officials contradicted themselves, sociologists grappled with difficult social problems, and writers experimented in fictional form with modern identities and relationships.Drawing on an uncommonly varied body of sources, including novels, journals, diaries, sociological research, public health brochures, surveys, and party documents-many examined here for the first time in English-Carleton reveals the dramatic, bizarre, and intriguing ways the sexual revolution was discussed and represented. Amidst this chaos, he discerns a historical process of codification and reaction, leading ultimately to the quelling of debate in the 1930s through the harsh dictates of Stalinism.Sexual Revolution in Bolshevik Russia challenges Western writers who portray revolutionary Russia as either prudish or hedonistic by reconstructing a fuller picture of what circulated in Bolshevik culture and why. Carleton brings a complex human dimension to the subject, demonstrating that this controversy should not be viewed as a sideshow curiosity, but rather as a central aspect of the dramatic debates on early Soviet literature and culture.