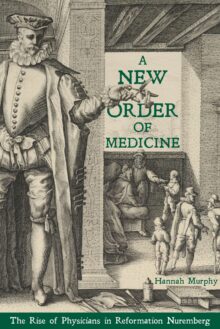 A New Order of Medicine

The Rise of Physicians in Reformation Nuremberg

The sixteenth century saw an unprecedented growth in the number of educated physicians practicing in German cities. Concentrating on Nuremberg, A New Order of Medicine follows the intertwined careers of municipal physicians as they encountered the challenges of the Reformation city for the first time. Although conservative in their professed Galenism, these men were eclectic in their practices, which ranged from book collecting to botany to subversive anatomical experimentations. Their interests and ambitions lead to local controversy. Over a twenty-year campaign, apothecaries were wrested from their place at the forefront of medical practice, no longer able to innovate remedies, while physicians, recent arrivals in the city, established themselves as the leading authorities. Examining archives, manuscript records, printed texts, and material and visual sources, and considering a wide range of diseases, Hannah Murphy offers the first systematic interpretation of the growth of elite medical “practice,” its relationship to Galenic theory, and the emergence of medical order in the contested world of the German city.