Hilary Appel, an assistant professor of government at Claremont McKenna College, has published widely on economic and political change in central and eastern Europe and Russia. 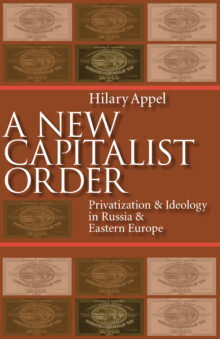 Privatization And Ideology In Russia And Eastern Europe

After the collapse of communism in the Soviet Union and eastern Europe, more than a dozen countries undertook aggressive privatization programs. Proponents of economic reform championed such large-scale efforts as the fastest, most reliable way to make the transition from a state-run to a capitalist economy.

The idea was widely embraced, and in the span of a few years, policymakers across the region repeatedly chose an approach that distributed vast amounts of state property to the private sector essentially for free-despite the absence of any historical precedent for such a radical concept. But privatization was not a panacea. It has, instead, become increasingly synonymous with collusion, corruption, and material deprivation.

Why was privatization so popular in the first place, and what went wrong? In answering this question, Hillary Appel breaks with mainstream empirical studies of postcommunist privatization.

By analyzing the design and development of programs in Russia, the Czech Republic, and across eastern Europe, Appel demonstrates how the transformation of property rights in these countries was first and foremost an ideologically driven process. Looking beyond simple economic calculations or pressure from the international community, she argues that privatization was part and parcel of the foundation of the postcommunist state.

A New Capitalist Order reveals that privatization was designed and implemented by pro-market reformers not only to distribute gains and losses to powerful supporters, but also to advance a decidedly Western, liberal vision of the new postcommunist state. Moreover, specific ideologies-such as anticommunism, liberalism, or nationalism, to name but a few-profoundly influenced the legitimacy, the power, and even the material preferences of key economic actors and groups within the privatization process.