Hilary Masters was the author of eight novels, two collections of short stories, a book of essays, and a family biography, Last Stands: Notes from Memory, that has been called “an American classic.” The American Academy of Arts and Letters has given his work its Award for Literature. 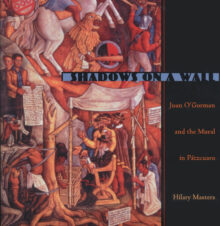 Shadows On a Wall

Juan O'Gorman and the Mural in Patzcuaro

Novelist and essayist Hilary Masters recreates a moment in 1940s Pittsburgh when circumstances, ideology, and a passion for the arts collided to produce a masterpiece in another part of the world. E. J. Kaufmann, the so-called “merchant prince” who commissioned Frank Lloyd Wright’s Fallingwater, was a man whose hunger for beauty included women as well as architecture. He had transformed his family’s department store into an art deco showcase with murals by Boardman Robinson and now sought to beautify the walls of the YM&WHA of which he was the president. Through his son E. J. Kaufmann, jr (the son preferred the lowercase usage), he met Juan O’Gorman, a rising star in the Mexican pantheon of muralists dominated by Diego Rivera, O’Gorman’s friend and mentor. O’Gorman and his American wife spent nearly six months in Pittsburgh at Kaufmann’s invitation while the artist researched the city’s history and made elaborate cartoons for the dozen panels of the proposed mural. Like Rivera, O’Gorman was an ardent Marxist whose views of society were radically different from those of his host, not to mention the giants of Pittsburgh’s industrial empire-Carnegie, Frick, and Mellon. The murals were never painted, but why did Kaufmann commission O’Gorman in the first place? Was it only a misunderstanding? In the discursive manner for which his fiction and essays are noted, Masters pulls together the skeins of world events, the politics of art patronage, and the eccentric personalities and cruel histories of the period into a pattern that also includes the figures of O’Gorman and his wife Helen, and Kaufmann, his wife Liliane, and their son. Masters traces the story through its many twists and turns to its surprising ending: E. J. Kaufmann’s failure to put beautiful pictures on the walls of the Y in Pittsburgh resulted in Juan O’Gorman’s creation of a twentieth-century masterpiece on a wall in the town of Patzcuaro, Mexico.