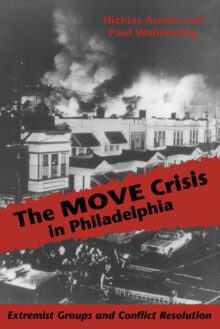 The MOVE Crisis In Philadelphia

In 1985, police bombed the Philadelphia community occupied by members of the black counterculture group MOVE (short for “The Movement”). What began fifteen years earlier as a neighborhood squabble provoked by conflicting lifestyles ended in the destruction of sixty-one homes and the death of eleven residents – five of them children. Some 250 people were left homeless.
Was this tragedy the only solution to the conflict? Were John Africa and his morally and ecologically idealistic followers “too crazy” to negotiate with?

The authors interviewed MOVE members and their neighbors, third-party intervenors, and representatives of the Philadelpia administration in the 1970s, and draw on their own knowledge of the field of dispute resolution. More than simply describing a terrible event, they examine the dynamics of conflict, analyzing attempts at third-party mediation and the possibility of resolution without violence. Their analytical approach provides insight into other major conflicts, such as the problems of perception and misperception in U.S. – Iranian relations.
In an age when terrorism and hostage-taking are regular features on the six o’clock news, their questioning of traditional views on negotiation with “irrational” adversaries is especially important.