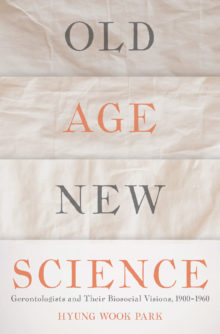 Gerontologists and Their Biosocial Visions, 1900-1960

Between 1870 and 1940, life expectancy in the United States skyrocketed while the percentage of senior citizens age sixty-five and older more than doubled—a phenomenon owed largely to innovations in medicine and public health. At the same time, the Great Depression was a major tipping point for age discrimination and poverty in the West: seniors were living longer and retiring earlier, but without adequate means to support themselves and their families. The economic disaster of the 1930s alerted scientists, who were actively researching the processes of aging, to the profound social implications of their work—and by the end of the 1950s, the field of gerontology emerged.

Old Age, New Science explores how a group of American and British life scientists contributed to gerontology’s development as a multidisciplinary field. It examines the foundational “biosocial visions” they shared, a byproduct of both their research and the social problems they encountered. Hyung Wook Park shows how these visions shaped popular discourses on aging, directly influenced the institutionalization of gerontology, and also reflected the class, gender, and race biases of their founders.