I. Michael Aronson (Ph.D., Northwestern University) is a professional writer and translator in Israel. 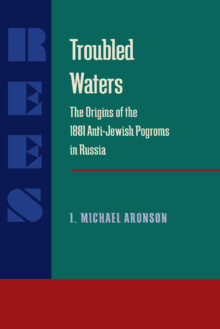 Origins of the 1881 Anti-Jewish Pogroms in Russia

By I. Michael Aronson

In this pathbreaking study, I. Michael Aronson offers a closely argued and many-faceted reinterpretation of Russian anti-Semitism and tsarist nationalities policy. He examines, and refutes, the widely held belief that the anti-Jewish pogroms in Russia in 1881 were a result of a conspiracy supported by the tsarist government or circles close to it, investigating claims and counterclaims about what happened during that fateful year and guiding the reader through a maze of events and decades of subsequent interpretations.

Although the pogroms are treated within the context of Russian history, Aronson's analysis has significance for Jewish studies as well. When the Russian government adopted reactionary and repressive policies, Jews began to seek new solutions to the problems that plagued them: massive numbers emigrated to the United States; other turned to revolutionary socialism; still others were attracted to Zionism and supported the creation of the state of Israel.