J. Allyn Rosser is the author of three previous poetry collections: Foiled Again, Misery Prefigured, and Bright Moves. She is the recipient of numerous awards, most recently the New Criterion Poetry Prize and fellowships from the Guggenheim and Lannan Foundations. Rosser is associate professor of English at Ohio University and is editor in chief of New Ohio Review. 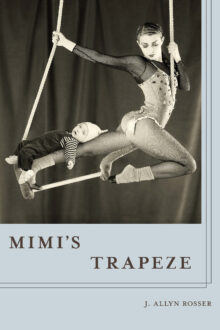 Rosser’s poems have always given a squinty sideways glance at cultural foibles and assumptions. Her distinctive brand of cheery skepticism implies that the genuine pursuit of truth is a virtue that renders tolerable the intolerable. These poems achieve a lyricism that gives free reign to the lush energies of language while remaining transparent enough to communicate something precise, fresh, and unsettling.

A driving force behind the poems in Mimi’s Trapeze is Rosser’s profound curiosity about all forms and conditions of life. Without distorting fact or motive, her speakers seek to navigate the mazes of our messy quotidian infelicities, ranging from imperfect love to squashing turtles on the road—from the history of artistic misrepresentations of women to global warming—attempting to calibrate the beautifully complex balance between desire and responsibility.

This collection dwells more on mortality and the lamentable state of the planet (and the spiritual unsoundness of its denizens) than her previous work. Another new vein can be traced in several poems that seek to distill a state like adolescence into a single word (“Dyahe”), reduce vast movements and disciplines into epigrammatic nutshells (Miniature Histories of the World”), or isolate a condition like grief in an element as simple as salt (“After the Service, the Widow Considers the Etymology of Salary”).

In Mimi’s Trapeze, her fourth book, Rosser takes a lighthearted view of dark subjects (see “Final Invitation”), and a dark view of light ones (“Intro to Happiness”). She has refined her vision, reaffirming her belief that poetry is the most direct and effective way for humans to alleviate their loneliness.