J. Ann Duncan (1940-1989) was fellow and director of studies at Newnham College, Cambridge. 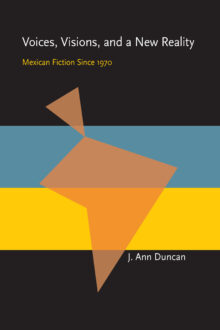 Voices, Visions, and a New Reality

This book introduces to a larger audience the work of a group of Mexican writers whose work reflects the stimulus of the “boom” of the 1960s, especially in the experimental nueva novella.

Duncan views the work of six writers in the context of more well known writers of the period (Ruflo, Fuentes, and Del Paso), and concludes with a chapter on other recent innovators in Mexican literature. Despite their diversity, these texts share many common features, and unlike social realism, the works are not openly political, but at the same time they question assumptions about reality itself-and the relation of fiction to truth.