James E. Casteel is assistant professor at the Institute of European, Russian, and Eurasian Studies at Carleton University in Ottawa, Canada. 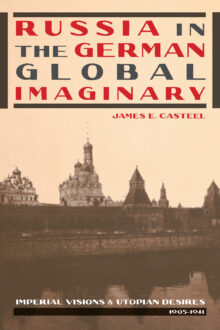 Russia in the German Global Imaginary

This book traces transformations in German views of Russia in the first half of the twentieth century, leading up to the disastrous German invasion of the Soviet Union in 1941. Casteel shows how Russia figured in the imperial visions and utopian desires of a variety of Germans, including scholars, journalists, travel writers, government and military officials, as well as nationalist activists. He illuminates the ambiguous position that Russia occupied in Germans’ global imaginary as both an imperial rival and an object of German power. During the interwar years in particular, Russia, now under Soviet rule, became a site onto which Germans projected their imperial ambitions and expectations for the future, as well as their worst anxieties about modernity. Casteel shows how the Nazis drew on this cultural repertoire to construct their own devastating vision of racial imperialism.