James Howard Bridge was a journalist, and personal secretary to Andrew Carnegie. 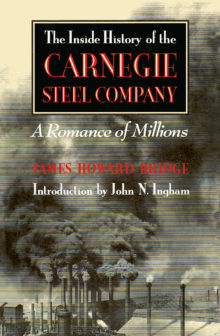 The Inside History of the Carnegie Steel Company

A Romance of Millions

“For years I have been convinced that there is not an honest bone in your body. Now I know that you are a god-damned thief,” Henry Clay Frick reportedly told Andrew Carnegie at their last meeting in 1900, just before J. P. Morgan bought the Carnegie Steel Company and founded United States Steel. Three years later, James Bridge, who had served as Carnegie’s personal secretary, published this book. In it he recounted the events that led up to the final confrontation between two of America’s most powerful capitalists. The book created a sensation when it appeared in 1903. Not only did it describe the raw emotions of Carnegie and Frick, those most brilliant and uneasy of business partners, it also told of the history and inner workings of the industrial giant, Carnegie Steel. Bridge was an open partisan of Frick, and the portrait of Carnegie that emerges from this book is not flattering. But he was an experienced journalist, and he uses sources carefully. His book remains a striking insider’s narrative of the American steel industry in the last decades of the nineteenth century-as well as the most revealing account of the emotions of some of its major owners. The introduction by John Ingram places the book in perspective for both the historian and general reader.