James L. Flannery is associate professor of legal writing at the University of Pittsburgh School of Law. He is an editor of Pittsburgh Tax Review. 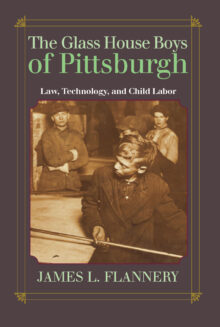 The Glass House Boys of Pittsburgh

At the end of the nineteenth century, Pittsburgh was leading the nation in glass production, and glass bottle plants in particular relied heavily on adolescent (and younger) males for their manufacturing process. These “glass house boys” worked both day and night, as plants ran around the clock to meet production demands and remain price competitive with their newly-automated rivals. Boys performed menial tasks, received low wages, and had little to say on their own behalf.

By the turn of the century, most states had enacted laws banning children from working at night, and coupled with compulsory education requirements, had greatly reduced the use of children in industry. In western Pennsylvania, however, child labor was deeply entrenched, and Pennsylvania lawmakers lagged far behind the rest of the nation. In The Glass House Boys of Pittsburgh, James L. Flannery presents an original and compelling examination of legislative clashes over the singular issue of the glass house boys. He reveals the many societal, economic, and political factors at work that allowed for the perpetuation of child labor in this industry and region.

Through extensive research in Pennsylvania state legislature archives, National Child Labor Committee reports, and union and industry journals, Flannery uncovers a complex web of collusion between union representatives, industrialists, and legislators that kept child labor reform at bay. Despite national pressure, a concerted effort by reformers, and changes to education laws, the slow defeat of the “glass house exception” in 1915 came about primarily because of technological advances in the glass bottle industry that limited the need for child labor.