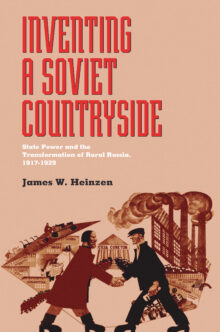 State Power and the Transformation of Rural Russia, 1917–1929

Following the largest peasant revolution in history, Russia's urban-based Bolshevik regime was faced with a monumental task: to peacefully “modernize” and eventually “socialize” the peasants in the countryside surrounding Russia's cities. To accomplish this, the Bolshevik leadership created the People's Commissariat of Agriculture (Narkomzem), which would eventually employ 70,000 workers. This commissariat was particularly important, both because of massive famine and because peasants composed the majority of Russia's population; it was also regarded as one of the most moderate state agencies because of its nonviolent approach to rural transformation.
Working from recently opened historical archives, James Heinzen presents a balanced, thorough examination of the political, social, and cultural dilemmas present in the Bolsheviks' strategy for modernizing of the peasantry. He especially focuses on the state employees charged with no less than a complete transformation of an entire class of people. Heinzen ultimately shows how disputes among those involved in this plan-from the government, to Communist leaders, to the peasants themselves-led to the shuttering of the Commissariat of Agriculture and to Stalin's cataclysmic 1929 collectivization of agriculture.