Jared N. Day is adjunct professor and research associate in the history department at Carnegie Mellon University. He is the author of Urban Castles: Tenement Housing and Landlord Activism in New York City, 1890-1943. 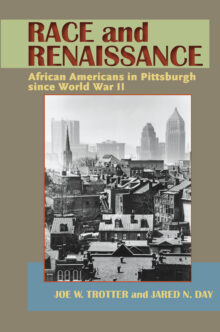 African Americans from Pittsburgh have a long and distinctive history of contributions to the cultural, political, and social evolution of the United States. From jazz legend Earl Fatha Hines to playwright August Wilson, from labor protests in the 1950s to the Black Power movement of the late 1960s, Pittsburgh has been a force for change in American race and class relations.

Race and Renaissance presents the first history of African American life in Pittsburgh after World War II. It examines the origins and significance of the second Great Migration, the persistence of Jim Crow into the postwar years, the second ghetto, the contemporary urban crisis, the civil rights and Black Power movements, and the Million Man and Million Woman marches, among other topics.

In recreating this period, Trotter and Day draw not only from newspaper articles and other primary and secondary sources, but also from oral histories. These include interviews with African Americans who lived in Pittsburgh during the postwar era, uncovering firsthand accounts of what life was truly like during this transformative epoch in urban history.

In these ways, Race and Renaissance illuminates how African Americans arrived at their present moment in history. It also links movements for change to larger global issues: civil rights with the Vietnam War; affirmative action with the movement against South African apartheid. As such, the study draws on both sociology and urban studies to deepen our understanding of the lives of urban blacks.