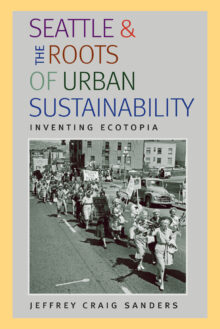 Seattle and the Roots of Urban Sustainability

Seattle, often called the “Emerald City,” did not achieve its green, clean, and sustainable environment easily. This thriving ecotopia is the byproduct of continuing efforts by residents, businesses, and civic leaders alike. In Seattle and the Roots of Urban Sustainability, Jeffrey Craig Sanders examines the rise of environmental activism in Seattle amidst the “urban crisis” of the 1960s and its aftermath. Like much activism during this period, the environmental movement began at the grassroots level&mdash;in local neighborhoods over local issues. Sanders links the rise of local environmentalism to larger movements for economic, racial, and gender equality and to a counterculture that changed the social and political landscape. He examines emblematic battles that erupted over the planned demolition of Pike Place Market, a local landmark, and environmental organizing in the Central District during the War on Poverty. Sanders also relates the story of Fort Lawton, a decommissioned army base, where Audubon Society members and Native American activists feuded over future land use. The rise and popularity of environmental consciousness among SeattleÆs residents came to influence everything from industry to politics, planning, and global environmental movements. Yet, as Sanders reveals, it was in the small, local struggles that urban environmental activism began.