Jeffrey W. Rubin is associate professor of history at Boston University. He is the author of Decentering the Regime: Ethnicity, Radicalism, and Democracy in Juchitan, Mexico, coauthor of Sustaining Activism: A Brazilian Women’s Movement and A Father-Daughter Collaboration, and coeditor of Lived Religion and Lived Citizenship in Latin America’s Zones of Crisis, a special issue of the Latin American Research Review. 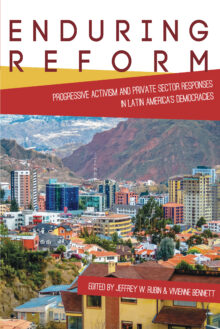 Over the last twenty years, business responses to progressive reform in Latin America have shifted dramatically. Until the 1990s, progressive movements in Latin America suffered violent repression sanctioned by the private sector and other socio-political elites. The powerful case studies in this volume show how business responses to reform have become more open–ended as Latin America’s democracies have deepened, with repression tempered by the economic uncertainties of globalization, the political and legal constraints of democracy, and shifting cultural understandings of poverty and race.

Enduring Reform presents five case studies from Mexico, Brazil, and Argentina in which marginalized groups have successfully forged new cultural and economic spaces and won greater autonomy and political voice. Bringing together NGO’s, local institutions, social movements, and governments, these initiatives have developed new mechanisms to work ‘within the system,’ while also challenging the system’s logic and constraints.

Through firsthand interviews, the contributors capture local businesspeople’s understandings of these progressive initiatives and record how they grapple with changes they may not always welcome, but must endure. Among their criteria, the contributors evaluate the degree to which businesspeople recognize and engage with reform movements and how they frame electoral counterproposals to reformist demands. The results show an uneven response to reform, dependent on cultural as much or more than economic factors, as businesses move to decipher, modify, collaborate with, outmaneuver, or limit progressive innovations.

From the rise of worker-owned factories in Buenos Aires, to the collective marketing initiatives of impoverished Mayans in San Cristóbal de las Casas, the success of democracy in Latin America depends on powerful and cooperative social actions and actors, including the private sector. As the cases in Enduring Reform show, the democratic context of Latin America today presses businesspeople to endure, accept, and at times promote progressive change in unprecedented ways, even as they act to limit and constrain it.